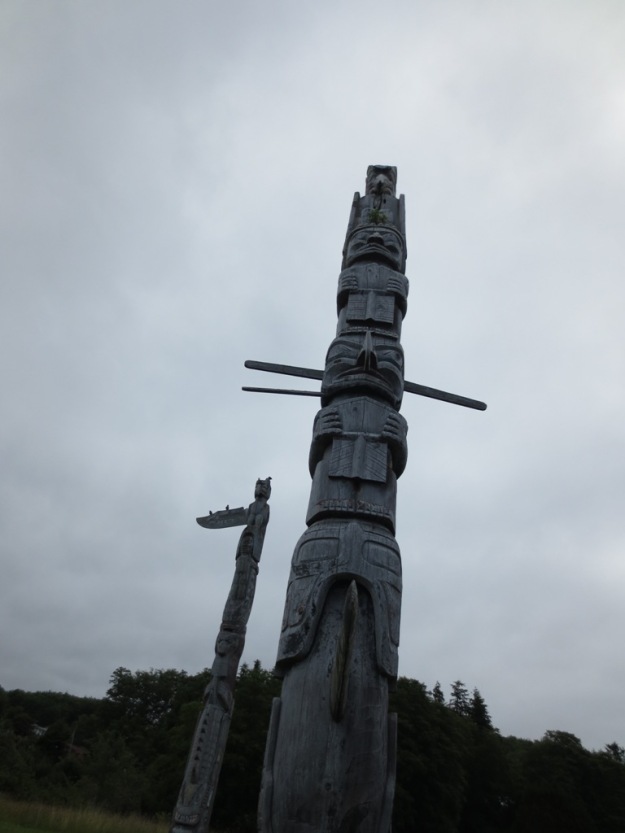 I have just returned from Alert Bay, a small village on Cormorant Island, off the North Coast of Vancouver Island, British Columbia. The trip started very early in the morning with a ferry ride from Vancouver on the mainland to Nanaimo, then a long drive to the Northern tip of Vancouver Island to Port McNeill to take a final ferry to Alert Bay, just before sunset. 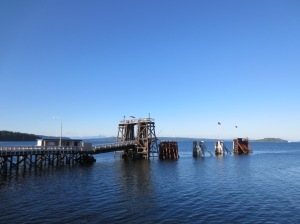 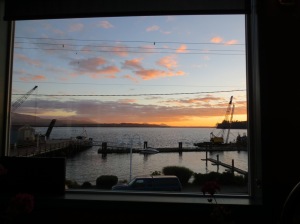 This was my third visit, and still, driving the whole length of this big island is always thrilling. The road stretches for miles and miles through big dense forests, with almost no one except for deer grazing on the side of the road and eagles flying above. It feels as if the forest will swallow you as soon as you stop moving. What’s even more astounding is that Port McNeill is “only” at the half-way mark to the north of British Columbia where it touches Alaska and the Yukon!

Alert Bay is the traditional home of the ‘Namgis First Nations who had established a thriving salmon fishing community there long before Captain Vancouver anchored his ship off the coast in the late 1700’s. It has always been an important fishing and supply centre, as the turn-of-the-century wooden buildings that still stand on Fir Street can attest. And it is famous for its totem poles. 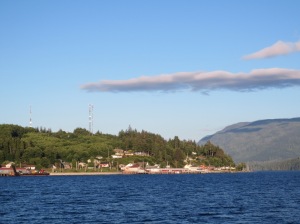 Alert Bay from the ferry.

The bay from Fir Street. 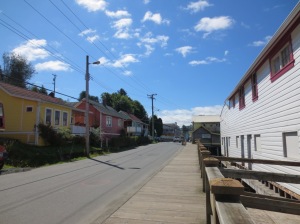 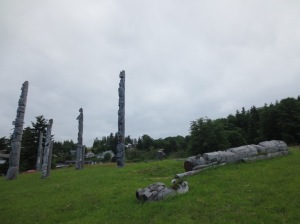 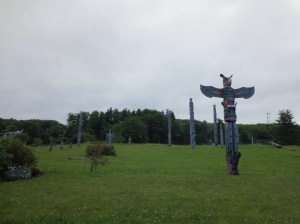 This tiny island with a population of about 1,400 people has a very rich and, at times, turbulent history. On my first visit in the late eighties, the tension between the two communities was palpable (the population of the village is roughly half native and half non-native). Potlatchs (gift-giving festivals practiced by the Northwest coast tribes) had been made illegal in 1884 by the Canadian government and all the artefacts had been confiscated. After the ban was lifted in 1951, people continued fighting for the return of their ritual objects that were by then dispersed in several museums in Canada and around the world. Most of these objects have finally been returned to the village. They now constitute the “Potlatch Collection” of the U’mista Cultural Centre  – “U’mista” means “Return of our treasures”. This world-renowned collection of copper shields, dance regalia and carved masks is alone worth a trip should you consider exploring this part of Canada. 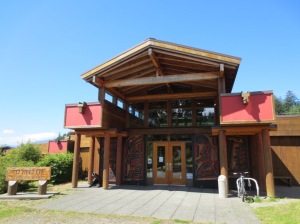 On my second and third visits, I found a healed community, warm and welcoming. In 1999, the Village of Alert Bay and the ‘Namgis First Nations signed the Alert Bay Accord, “a unique document under which they agreed to mutual support in civic and cultural matters affecting both jurisdictions”. U’mista strives to keep the rich cultural history of the First Peoples of the island alive and to “forge links between the past, present and future generations”. The traditional songs and dances of the potlatchs are being taught, as well as kwak’wala, the language of the Kwakwaka’wakw people.

Strolling through the village, accompanied by the croak of Raven the Trickster echoing from the tall cedars, I am reminded of the power of these treasures, and the totem poles come alive.